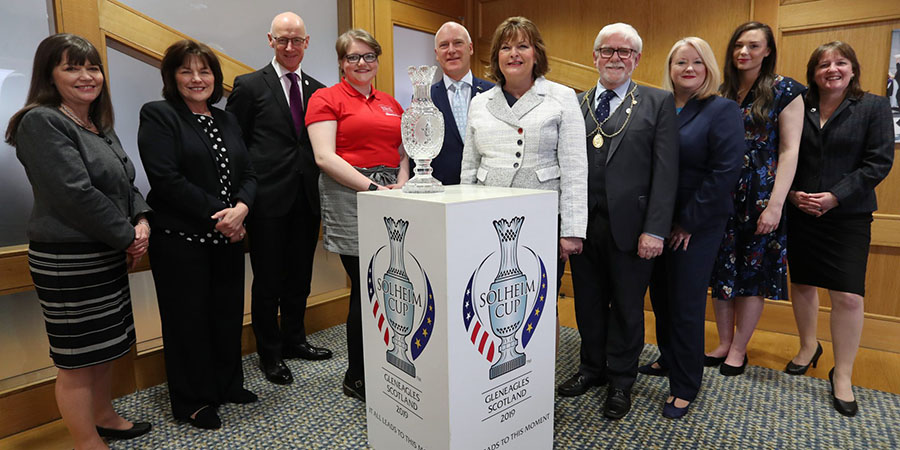 Two charities have been unveiled as the Official Charity Partners of The 2019 Solheim Cup following a comprehensive process to identify organisations to benefit from Scotland’s staging of the world’s biggest women’s golf event.

Action for Children and Perthshire Women’s Aid will benefit from in excess of £30,000 worth of inventory for The 2019 Solheim Cup at Gleneagles from 9-15 September as well as a host of other promotional and fundraising activities.

Both charities were chosen to support the three pillars of equality, experience and innovation which sit at the heart of the delivery of The 2019 Solheim Cup and to help expand the benefits of hosting one of the world’s premier sporting events far beyond the fairways of Gleneagles.

Action for Children, which has its Scottish headquarters in Glasgow, has been appointed as the Official National Charity Partner following a selection process led by The Scottish Government and will maximise its engagement with the event to benefit the lives of children across Scotland.

Perthshire Women’s Aid, based in Perth, was nominated by Perth & Kinross Council and Gleneagles as the host region and host venue and has been granted the status of Official Regional Charity Partner to ensure benefits from hosting The 2019 Solheim Cup are realised locally.

Joe FitzPatrick, Minister for Public Health, Sport and Wellbeing, said: “Charity should be a hugely important component of any socially responsible major event and I’m delighted that The 2019 Solheim Cup will be raising funds for these two deserving charitable organisations.

“The 2019 Solheim Cup is one of the world’s biggest women’s sporting events and has the potential to deliver a multitude of benefits to Scotland, including valuable charitable activity to help some of the country’s most vulnerable people. Through this partnership both Action for Children and Perthshire Women’s Aid will be able to promote their excellent work to a global audience as well as raising funds to benefit people both locally and nationally.”

Paul Carberry, Action for Children Director for Scotland, said: “Everyone at Action for Children is very proud to be the ‘National Charity Partner’ of this year’s Solheim Cup. September will see the eyes of the world fall on Scotland as the finest golfers from around the world descend on the iconic Gleneagles. Across Scotland, we support around 20,000 of the country’s most disadvantaged and vulnerable children, young people and families in 87 services. The partnership with the Solheim Cup will offer opportunities for the children and young people we support to participate in sports and activities and let more people find out about the innovative work we do within the communities they work and live in.”

Heather Williams, Interim Manager for Perthshire Women’s Aid, said: “Perthshire Women’s Aid are delighted to have been selected as the local charity for this year’s Solheim Cup. We believe this will be a fantastic platform to ensure a wide audience are aware of the life changing services we offer to women, children and young people with experience of domestic abuse. Having the opportunity to be involved in an event which celebrates women’s sporting achievements fits with PWA’s vision of an equal society where women and girls live lives free from abuse.”

Provost of Perth and Kinross Dennis Melloy said: “We have chosen to nominate Perthshire Women’s Aid as one of the official charities of The 2019 Solheim Cup because we feel that this world renowned all-female golfing tournament will provide an ideal vehicle to promote the work of Perthshire Women’s Aid. This very worthwhile charity is aimed at helping women by providing specialist knowledge and understanding of the issues that surround domestic abuse whilst working to ensure that its services are easy to access for anyone who identifies as a woman.”

Sharan Pasricha, CEO of Gleneagles and Ennismore, said: “A key commitment across our business is to give back by ‘Doing More’. Every member of our team is given the support and encouragement to do this through a range of charitable projects and activities that aim to extend our hospitality to those who cannot access or afford it. We’re thrilled the Solheim Cup will not only be a superb celebration of elite-level sport, but an excellent opportunity to raise awareness of, and funds for, these two charities which carry out vital work to improve the lives of some of the most vulnerable, both nationally and here on our doorstep in Perthshire.”

Scotland aims to host the most family-friendly golf event in history when The 2019 Solheim Cup is played at Gleneagles with a host of family-focussed activities, family parking*, free attendance for children under the age of 16 and tickets priced from just £10 per adult.

On the course, European Captain and VisitScotland Ambassador, Catriona Matthew, is looking to return the trophy to Europe in 2019 after an inspired USA team retained their trophy by 16 ½ to 11 ½ points, in front of record crowds in Iowa. Organisers are now aiming to set a new record for a European edition in 2019.

Themes of equality, innovation and experience underpin all the event’s planned communications and on site activity at Gleneagles as The 2019 Solheim Cup aims to engage both the traditional golf audience and the wider sport fan, raising the profile of women’s golf both in Scotland and internationally.

The Scottish Government and VisitScotland have been long-time supporters of the women’s game, having partnered with the ASI Women’s British Open and the recently significantly enhanced Aberdeen Standard Investments Ladies Scottish Open.

The 2019 Solheim Cup will not only showcase the stunning assets of Scotland, the Home of Golf, but also build on the legacy of the successful 2014 Ryder Cup at Gleneagles. It will underline that Scotland is the perfect stage for major golf events as it seeks to help inspire a new generation of children to take up the game invented in their home country.

For more information or to book tickets visit www.solheimcup2019.com