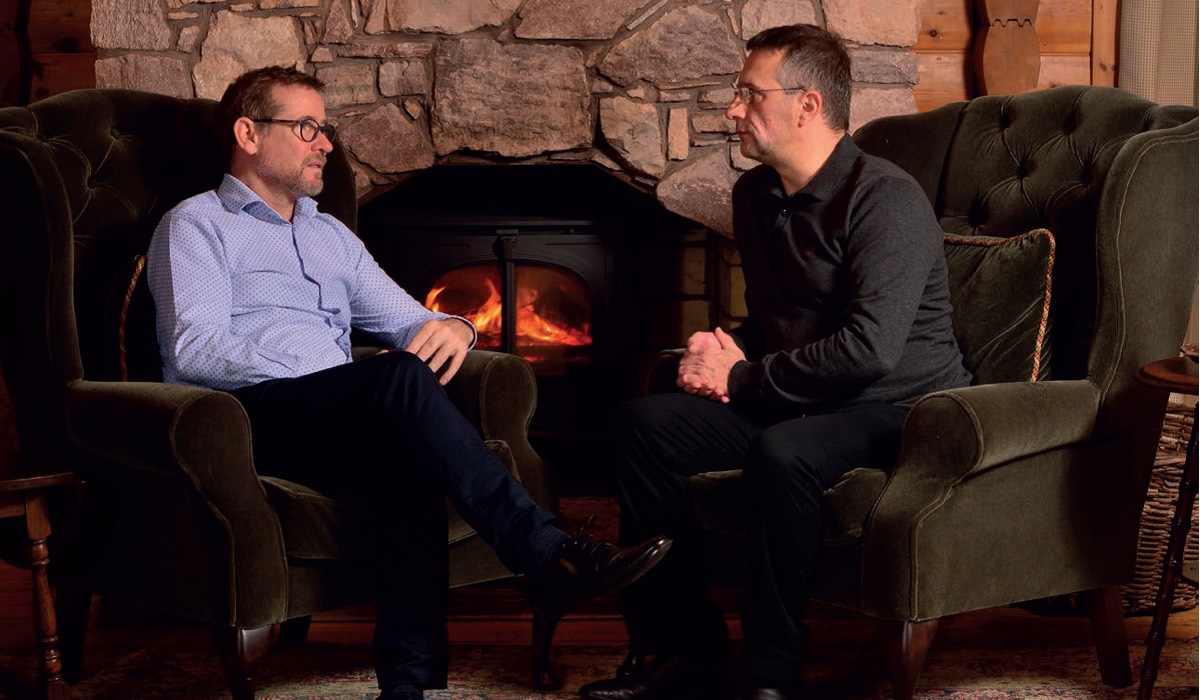 After the sell-out success of their last dining event at gleneagles, Andrew Fairlie has once again teamed up with Alain Roux from the famous waterside inn in bray to curate a special, seasonal menu. Rosalind Erskine talks to the about cooking and those all-important Michelin stars.

Andrew: We did a dinner last year and it was pretty much a collaboration between the Waterside Inn and Restaurant Andrew Fairlie. We [Alain and Michel] were chatting casually and we came up with the idea that it’d be nice to do a dinner in Scotland. Predominately to get Alain out of the kitchen as he doesn’t leave his kitchen too often. That in itself is a coup to get Alain up here!

Alain and I did a joint menu and the event literally sold out within a couple of hours. It was a fantastic event but it gave us a problem in the sense that there were so many people that couldn’t get in, hence the reason for doing another one this year. So we decided to do it again, a menu of Scottish game and Scottish seafood. Alain has done three dishes, we’ve done three dishes and we have matched them with wine. Again, this year proved so popular that within a day or so the event was sold out.

Alain: Not always, no. When you’re not your own environment, your element, with your own equipment then you haven’t got your marks. In another kitchen, the ovens are different, there’s different temperatures on the worktops and solid tops and you might have a problem sorting out the ingredients as well. So you have to be ready to adapt recipes and use all of your skills.

But in saying all that, I do love being in Andrew’s kitchen. I think it is unique, like Andrew. You can see a lot of happy people. It is not a big team but every single chef is not only focused on what they do but you can see and feel that they are happy. And they specialise in quality cooking. When I have been Andrew’s kitchen, everyone is always ready to help. They guide me and are able to bring me anything I need. Nothing is too much trouble. That’s why I come up here to work with Andrew.

With regards to the Roux scholarship, if you want to enter it then you have to have very good all round knowledge of food, cooking and cooking techniques. If you are going to enter it, you need to enter it because you want to win it. When you put that application form in you have to see yourself as the winner at the end of it as the competition is very, very tough. But it is a competition that, if you do win it, or even if you’re in the final, it’s a fast track to your career. It’s one of the most prestigious cooking competitions in the world now so you want to keep that in mind when applying.

When I won the scholarship in 1994, I remember there was a lot of publicity at the time and I was asked what my ambitions were and I remember saying that I wanted to return to Scotland and have a Michelin-starred restaurant. I had no idea I’d return home 14 miles away from where I grew up but life happens like that sometimes!

Alain: The stars at the Waterside are for the team – the kitchen and front of house. I see the stars but I also see our customers as being more important. Without the customers I couldn’t cook or do anything. But for me, there’s no hiding. In other ways of cooking, there is a curtain in front of the dish and the service. It is kind of fake. If something is not cooked or seasoned properly in my cooking you can see it and taste it. And I think that is what defines good cooking. The three Michelin stars were at the Waterside before I arrived so I feel like they aren’t much to do with me.

When it comes to the star rating, people say one star is for cooking, two stars are for cooking and service and three stars are for consistency. In years gone by Michelin stars were about French style cooking and service but now things can be a bit more funky, modern and easy going. People want a journey when visiting a restaurant. Some work and some don’t. I love it, it’s a bit like cinema or theatre. You need those shows. In our world we like variety.

Andrew: My interpretation of Michelin is that I think there’s a lot of myth behind it and I don’t think that many people understand what Michelin is about. I think that the general public in the UK have only, in the last five years, started to understand Michelin stars and what that means.

In Michelin terms, generally one star is that you get inspected by a team of inspectors anonymously – generally you’ll get one official inspection a year where an inspector will come, eat and pay then bill and only then will they give a card and ask if the chef/owner is in as they want to have a discussion. I think nowadays there’s more dialogue with Michelin inspectors than there ever was before. If you’d asked an inspector ten years ago how was your meal, you’d get one word answers. There was no feedback. Now they engage a lot more with chefs which I think is a good thing. For a one star to progress two stars, for Michelin it’s all about consistency. They don’t want to award one star then have to take it back the next year, so they want to know that there is going to be consistency in the kitchen and service.

Alain: there’s always more pressure when there’s more stars around and I think that’s natural. If you look at the first year that the Michelin guide came out in Great Britain, there was about 12 stars and now there’s about 120-130. In our area at the Waterside Inn, we were the only Michelin star restaurant for maybe 15-20 years and you look now and there’s about 15 stars in a radius of about 15-20 miles. It is competition and competition is good for everyone. We help each other and when you’ve got so many restaurants around then you become a gastronomic destination and this attracts even more people to your restaurant. Every service is like a new beginning. You don’t take your stars or your years of cooking experience for granted. Every customer and every time you cook is important.

Andrew: You can’t be complacent about it at all because, as Alain said, it’s like the theatre. You have to do it twice a day and make it pitch perfect every time. And that’s not easy. You also have to bring a team of people along with you when you’re on that journey and it is that consistency that makes it difficult. That’s where a lot of people fall down or fall short. Everyone can cook a three-star meal once. Or twice. But to do that every single day is the hard part.

It does bring stress and Alain is being very humble as every time he puts the key in the door of the Waterside Inn he knows that people are travelling from all over the world to taste and experience a three Michelin star meal. You can’t rest on your laurels with that. Again what Alain and I do – it’s not just cooking at that level – you have to manage a business properly. You have to coach a team around you and maintain that management of that team and that’s as important, if not more so than the cooking. Once you get to that level it’s not just about making fantastic sauces it’s about teaching people to make fantastic sauces so it’s about a whole load of different pressure.

The restaurant has grown organically in the past 16 years. I think our food is simpler now than when we first opened. I fell into the trap of, when I first opened a restaurant, making a mark so I was probably trying too hard. With old age you become more confident and you can present something that is a beautiful product.

Having the garden over the last five years has had a big impact on our food. In the summer about 95 per cent of all the veg that we serve and the garnish that we use comes from our own garden. The garden, during the summer months, leads how the menu is written and how we cook. The service style is a lot more relaxed and it surprises a lot of people as it’s a two-star Michelin restaurant in the heart of Gleneagles hotel – so already they have certain expectations about what that is going to be like. And lots of people arrive and they’re really surprised at how relaxed it is.

Andrew: the dining scene in Scotland has changed dramatically, but it has changed dramatically across the board. I think in Scotland we have always had restaurants that are very good. But I think the middle market in Scotland now is fantastic. I think the hierarchy of fine dining – for want of a better expression – in Scotland is very healthy. There’s lots of Michelin stars in Scotland but I think, what the middle market is doing is pushing the high end or fine dining part of our industry a little further as well because everything is catching up. This forces us to look around at the competition. Likewise, they look at what we are doing and think about upping the game. As Alain said competition is healthy. As a very proud Scot, you would not recognise the dining scene from 20 years ago to now.

If you want to dine, you can travel the length and breadth of Scotland and if you do your homework you can eat in some fantastic places. Even in the remote places. I am very proud of the work that has been done in Scotland. We say it all the time, we have the most amazing produce. I think for some of the younger chefs, they probably try too hard sometimes. If I am tourist and I’m coming to Scotland I want amazing porridge, I want amazing smoked salmon. I don’t want amazing smoked salmon turned into something else. I think if they just take their foot off the gas a little bit and just be proud of what is there is and what we do well here.

Alain: The future, for me, will be to continue to learn about my trade and continue to make my staff and customers happy. And be healthy. Because if I am not healthy then I’ll have to stop doing what I love.

Andrew: I’ve no grand plans. I love my restaurant and I still enjoy cooking in it. In the last year I have done one or two projects that are outside of cooking, for example I have just completed a collaboration with a young Scottish designer, Iona Crawford, that has taken up a minimal amount of time, but I enjoyed it and it has been successful. Now, at the age I am at and the way that the restaurant is structured and running, as Alain says, it’s all about maintaining. I want to maintain good health and do things that I want to do, and enjoy. I’ll spend time with family and loved ones. I don’t intend to open.