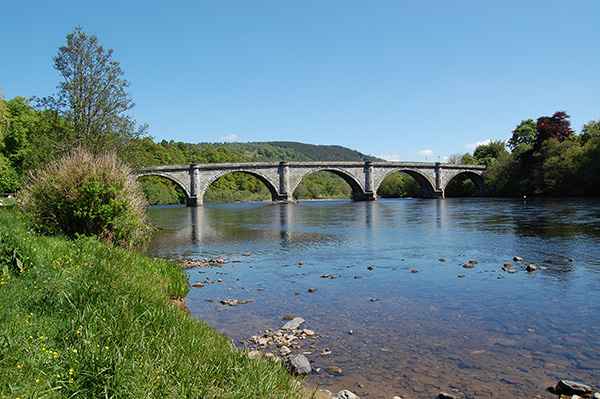 The arrival of warmer spring days at Gleneagles signal it’s time to shed the extra layers of clothing and enjoy the great outdoors. From our trees bursting into green leaf to the birds nesting in the hedgerows, it’s a splendid time of year to see nature waking up from its winter slumber. We’re spoilt by a range of beautiful walks, villages and areas of interest on our doorstep, including the bustling and historic wee village of Dunkeld.

The perfect spot for a day trip, Dunkeld is renowned for its cheery coffee shops, bakeries, restaurants, pubs and gift shops; its cathedral, which houses the tomb and armoured effigy of the ‘Wolf of Badenoch’; as well as its lively arts scene.

Steeped in history, the village was the site of a bloody battle on 21 August 1689 when King James-supporting Jacobite clans clashed with the government regiment that supported the newly-crowned William of Orange and his wife Queen Mary.

Thanks to a National Trust restoration project, Dunkeld’s ‘Little Houses’ – a charming row of 18th century merchants houses in Cathedral Street which were severely neglected and in danger of being demolished in the 1950s – offer a superb glimpse into the village’s past.

There are also a number of quaint dog-friendly pubs and historic hotels, including the cosy and lively Taybank, which is renowned for its live music, and the friendly Atholl Arms Hotel, where it’s said that in 1844 Princess Victoria, Princess Royal and oldest daughter of Queen Victoria, enjoyed a stay.

Dunkeld’s surrounding countryside offers breath-taking scenery and a fantastic choice of riverside walks and bike rides. Head to the trails, iconic trees, water pools and roaring falls of the Hermitage – a patch of forest managed by the National Trust for Scotland which was originally designed as a pleasure ground for the Dukes of Atholl – and follow in the footsteps of Wordsworth, Mendelssohn and Turner who drew inspiration from the area’s dramatic landscape.

Bordering the village of Dunkeld is Birnam, made famous by Shakespeare’s Macbeth. Our Birnam Brasserie is actually named after the ancient Birnam Oak – the last remaining fragment of Birnam Wood. Over the last decade, our guests have raised hundreds of thousands of pounds through a £1 check-out donation scheme to support wildlife conservation projects in the region, including emergency work on the Birnam Oak, to ensure the great tree’s survival for future generations.