We need to talk about men's mental health 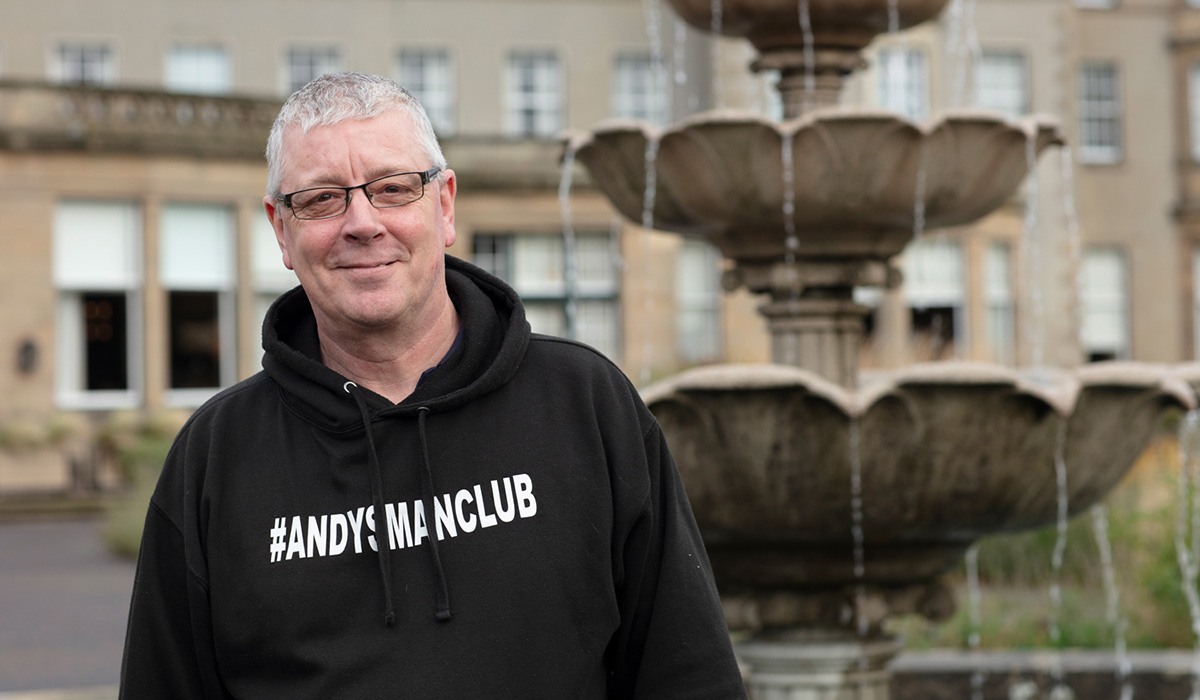 In celebration of International Men’s Day, we caught up with local man, Gleneagles joiner and Andys Man Club facilitator, Billy Ramsay, who spoke to us about his own very personal journey with mental health. In sharing his story, Billy hopes to raise awareness of the importance of men’s mental wellbeing and encourage other men to seek support.

In 1987 when I was 22 years old, I was getting ready to go to work one morning when my mum phoned me. She asked me if my younger brother, David, had stayed with me the night before because he hadn’t come home.  I told her I hadn’t seen him.  I didn’t think much of it that morning; I thought he’d probably stayed over at a pal’s house.

I was playing golf with him that evening so I knew I’d see him later. But when I got to the golf club, his car wasn’t in the car park.  I dropped in to his best mate’s house to ask if he’d seen him, but he didn’t know where he was. By that stage, I was beginning to panic.  When I drove round to my parents, I saw the police car parked outside.  I walked inside the house and I’ll never forget my mum’s words: “They’ve found him; he’s dead.”

David had taken his own life aged only 21.

It was a devastating blow.  I never really mourned him at the time because I sprang into protective mode – making sure my parents were okay and taking care of the funeral arrangements. In hindsight, I was trying to deflect the pain from them and take it on myself. That was when I started to keep everything inside.

I couldn’t do enough to stay busy at work – I kept myself as occupied as possible and tried to block everything out.  There would be nights I’d be sitting at a party or in a bar with good friends. Everyone would be enjoying themselves and I’d be smiling and laughing too, but inside I was suffering and barely holding it together; I just wanted to go home and be alone. I very rarely spoke about David which is something that my children picked up on – they’d say ‘why do we never talk about Uncle David?’  Now I can see how harmful it was for me to bottle it all up.

Historically in the UK, we’ve had this weird and unhealthy attitude to men sharing their feelings and expressing emotions like pain, grief, sadness or distress.  Up until recently, not only did we, as men, feel uncomfortable talking about having these feelings.  We also felt uncomfortable listening to other men talking about theirs.  We don’t like facing our own pain, but we also don’t like facing other people’s pain.  As a result, we’ve created a culture of men not being able to express their feelings or share their struggles.

I’ve had to ask myself on occasion, if David had come to talk to me before he took his life and told me he was struggling, would I have actually wanted to listen to him? I think back then in 1987 the honest answer would have been no – I didn’t want to hear it.  If he’d tried to talk to me about his feelings, I’d have probably changed the subject.  All these years later, I still wrestle with that.

It’s only in the last few years since speaking with a psychologist and later joining Andys Man Club that I’ve realised I’ve been hurting myself by bottling up my feelings all my life.  Any problems or issues I had, I would never talk about them; I’d just keep everything inside me and try to cope as best as I could.  This usually involved sleeping as much as possible. I couldn’t wait to go to my bed and shut everything out. The thought was ‘if I’m sleeping, no harm can come to me’.  The pain was still there when I woke up in the morning but I’d get some temporary respite from it when I was asleep.

During a holiday in Turkey with my fiancée in 2019, I was in the shower getting ready to go out for dinner and I suddenly realised I had slumped to the bottom of the shower.  I’d been in there crouched down on the floor with the water running over me for 45 minutes and didn’t even realise it.  I’ve never been suicidal, but in that moment, a feeling came over me that I just didn’t want to be alive anymore.  On the plane on the way home, I was thinking to myself that if the plane fell out of the sky and I died, that would be just fine.

Later that summer, everything erupted in me like a pressure cooker. I went home to my bed after work one day and stayed there, drifting in and out of sleep and crying for hours. I couldn’t tell you what was going on because I wasn’t aware of anything.  My fiancée was away at the time so I was on my own and I stayed in bed all weekend.  When she got back, she was really distressed to see the state I was in.  We had a really good talk and she suggested I go to the doctor and also attend Andys Man Club, a charity that had helped a distant male relative of hers.  I knew I needed help so I agreed to go.  It took me a couple of weeks to build up the confidence to attend – I’d get myself showered with every intention of going but would back out at the last minute.

Eventually, one Monday night, I drove myself there and walked in. That first meeting was a bit of a blur, but I remember walking out and feeling like a weight had been lifted.  It appeared to me that some of the men in the room were much worse off than I was and I could begin to see my own problems with a sense of perspective that I hadn’t had before.  Other men had been through exactly what I was going through and were able to assure me that it would eventually get easier. I came out feeling the lightest I’d felt in a very long time.  I realised that I wasn’t alone.   In my whole life, I’d never sat with 12 guys before, where there wasn’t the slightest animosity in the room and everyone was there to support each other.  I thought to myself, ‘where has this club been all my life?’

It’s the same format every week. There are three questions – 1. How’s your week been? 2. Describe one positive thing from your week and 3. Talk about anything you want to get off your chest, positive or negative.  Then we break for a chat and a cup of tea.  Questions 4 and 5 change each week, but they’re deliberately lighter questions to end the session on a more positive note.  It could be as simple as ‘what’s your favourite movie?’ or ‘what’s your favourite song?’

There’s a ball that is passed around the room – if you’re holding it then it’s your opportunity to talk, if you want to, and everyone else in the group will give you the courtesy to listen.

There are all ages in attendance – from 18-year-olds to men in their 80s – and you can see the generational shifts in attitude.  Back in my day, men couldn’t talk about their feelings and we weren’t supposed to cry.  There was no support network, so we had no choice but to suffer in silence.  We’d grown up watching all the old films – the cowboys and the tough guys – and believed that real men were too strong for tears.

That expectation has directly contributed to the high male suicide rate.  It’s a stereotype that’s changing, though, thankfully.  Young men now are encouraged to talk about their feelings from an early age and Andys Man Club works hard to promote that message – our motto is ‘It’s okay to talk’.  I’ve got six grandchildren and five of them are boys, and it’s so important to me that they never stifle their feelings; that they are open, that they talk, and that they aren’t afraid to be emotional.

Andys Man Club has transformed my life and I believe that if it were around in 1987, my brother would still be alive.  Having benefitted so much from the charity myself, I now co- facilitate sessions of Andys Man Club at Gleneagles, which is open to all men in the local area who need support.  I would recommend it if you are struggling – whether you’re going through relationship struggles or financial worries; you’re suicidal, depressed or distressed; you’re feeling lonely or don’t have any friends; or you’re out of sorts, feeling lost or a wee bit low.  Even if you’re just curious and want to see what it’s all about, you’d be more than welcome. You can drop in when you like and you’re under no pressure to talk; sometimes just attending in silence and listening to others can make a huge difference.

Andys Man Club at Gleneagles meets every Monday night at 7.00pm at the Arena, a venue which offers privacy, parking and complimentary refreshments. For more information, visit the below link.