Gleneagles finishes the year on a high with double award success 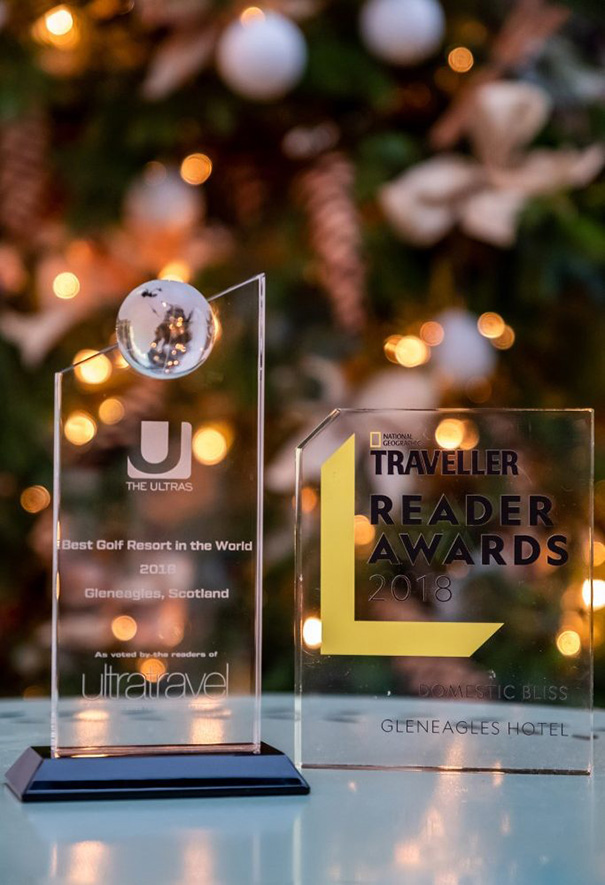 Gleneagles is delighted to have retained the accolade of ‘Best Golf Resort in the World’ at The Daily Telegraph and Ultratravel Magazine��s ULTRAs 2018 awards for a remarkable seven years running – a fitting achievement to mark the end of a successful year. In the same week, the hotel also scooped the ‘Domestic Bliss’ prize at the National Geographic Traveller Reader Awards 2018 for the second year in a row. Determined by readers’ votes, the two awards are the latest in a string of achievements for the hotel over the last 12 months.

A host of other awards won this year include being named ‘Best Hotel in the UK’ at the Condé Nast Traveller’s 2018 Readers’ Travel Awards; being ranked among ‘The 20 Best Hotels in the World’ in the Condé Nast Traveller 2018 Gold List; being voted Today’s Golfer Magazine’s ‘Best Hotel in Scotland’ for the fifth year in a row; taking the ‘European Golf Resort of the Year 2019’ prize at the golf industry IAGTO Awards; winning the prize for ‘Best Catering’ at the Scottish Golf Tourism Awards 2018; being named ‘Best Spa in Scotland’ at the Good Spa Guide 2018 Awards; and winning Best UK Golf Resort in the Square Mile Golf Awards 2018. General Manager, Conor O’Leary, was also crowned Hotelier of the Year at the Hotel Designs Brit List 2018.

In a year that has seen the hotel unveil more new spaces – with the launch of Ochil House, the new-look Dormy restaurant and the redesign of all its Braid House bedrooms – Gleneagles also scooped the Best Luxury Hotel title at the 2018 Hospitality Design Awards, and an interior design award for ‘Best Event Space’ at the 2018 AHEAD Awards.

Sharan Pasricha, Founder and CEO of Ennismore, said: “We’re thrilled to receive these latest awards which mark the culmination of an exciting year for Gleneagles, and we’re grateful to all the people who took the time to vote for us. The accolades we’ve received throughout the year recognise success across every part of our business – from our newly designed spaces, to our Spa, and from our golf experience to our culinary offering – and give us the momentum to make 2019 even better.”