Gleneagles puts golden era decadence back on the menu 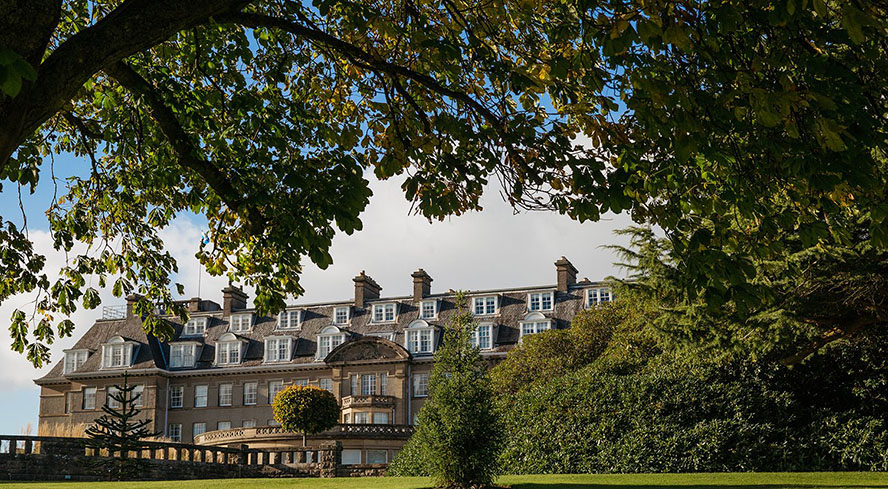 Gleneagles has announced plans to re-launch its famous restaurant, The Strathearn, in May, following a design transformation by its in-house creative team at London’s Ennismore Design Studio.

Inspired by the golden age of railway travel, the new-look restaurant will bring back the glamour and decadence of fine dining experiences of the 1920s and 30s.

The new designs will celebrate that elegant spirit through a setting that evokes the theatre of the outdoors and the beautiful flora and fauna of Scotland.

The creation of a stunning mosaic-floored orangery will offer beautiful views of the estate and the Ochil Hills across the seasons, while a new stage for musical performances will complement the elegance and drama of the rich décor – evocative of first-class carriage journeys in the early twentieth century. A new kitchen-style breakfast servery will also double up as an occasional private dining space – breathing fresh life into the area that housed Gleneagles’ kitchen in the 1920s.

The space – which has welcomed a host of famous faces over the decades, from Vivien Leigh, Sir Laurence Olivier and Sir Sean Connery, to John Travolta, Bob Hope and Her Majesty The Queen – is to unveil a show-stopping new look inspired by the golden age of railway travel, when glamorous socialites would travel in style from London to Gleneagles to enjoy summer seasons of country sports and decadent dining.

Dinner at The Strathearn will be a decadent affair, with traditional gueridon service from bespoke dining trollies bringing excitement and energy to the room as a selection of classic dishes are finished at the table. Personally attending each table, the team will add theatrical flair to the evening, as they effortlessly carve Gleneagles & Co Marrbury whisky barrel smoked salmon from Dumfries, prepare and dress a seasonal salad, or flambé a ‘Steak Strathearn’, Gleneagles’ take on Steak Diane on request.

The famous Gleneagles breakfast is having a sleek makeover too, with the new breakfast area, The Scullery, offering both ‘naughty and nice’ options – from the fruit and juice bar, the dairy and gluten-free area, and the avocado station, to the game, charcuterie, bread, pastries and cheese displays and the cocktail and Bloody Mary station. Items made from the finest locally-sourced ingredients, including Gleneagles’ own sausages, haggis, and carved bacon, will celebrate local produce and take centre stage alongside a live kitchen where chefs will make fresh pancakes and eggs to order.

The Strathearn will be overseen by Restaurant Manager, Daniel Greenock, who has moved home to Scotland having honed his craft at Marcus Wareing’s Michelin-starred restaurant at the Berkley Hotel and the world-renowned three Michelin-starred Eleven Madison Park in New York.

The kitchen brigade – led by Head Chef, Jason Hardcastle, Executive Sous Chef, Richard Dalgleish, and Executive Pastry Chef, Phil Skinazi, and overseen by Executive Chef, Simon Attridge – will be creating the restaurant’s menus. Using the finest locally-sourced and Scottish ingredients, the menus will celebrate classic French cuisine and the best of the season.

Heading up the wine programme, Advanced Court of Master Sommelier, Jean-Marie Contestin – who formerly managed the wine programmes at the two Michelin-starred Gidleigh Park and Le Pont de la Tour in London – will oversee a wine list that has doubled in size to 700 wine labels. There will also be a choice of over 100 single malt whiskies on the menu.

Sharan Pasricha, CEO of Gleneagles and Ennismore, said: “As one of the final strands of our three-year design transformation, the renovation of The Strathearn restaurant was always going to be one of the most important phases of all. After years of meticulous planning, 12 months of interior design work and four months of careful renovation, we can’t wait to unveil the beautiful new look in May.

“Originally known simply as ‘the Dining Room’, the restaurant has been a destination for decadent dining and lively celebrations since Gleneagles first opened nearly 100 years ago. It’s been cherished by generations of guests, so we didn’t want to radically change the fabric of the space or the spirit of the experience. Instead, we wanted to take the essence of The Strathearn and turn up the volume. By amplifying all the elements that are so well loved – the elegant décor, the history, the lively atmosphere, the culinary theatre and the exceptional food – the team has brought back the vibrancy, energy, playfulness and glamour of fine dining experiences a century ago.”

The Strathearn will re-open on 1 May. To book a table see www.gleneagles.com/dine-drink/the-strathearn/.