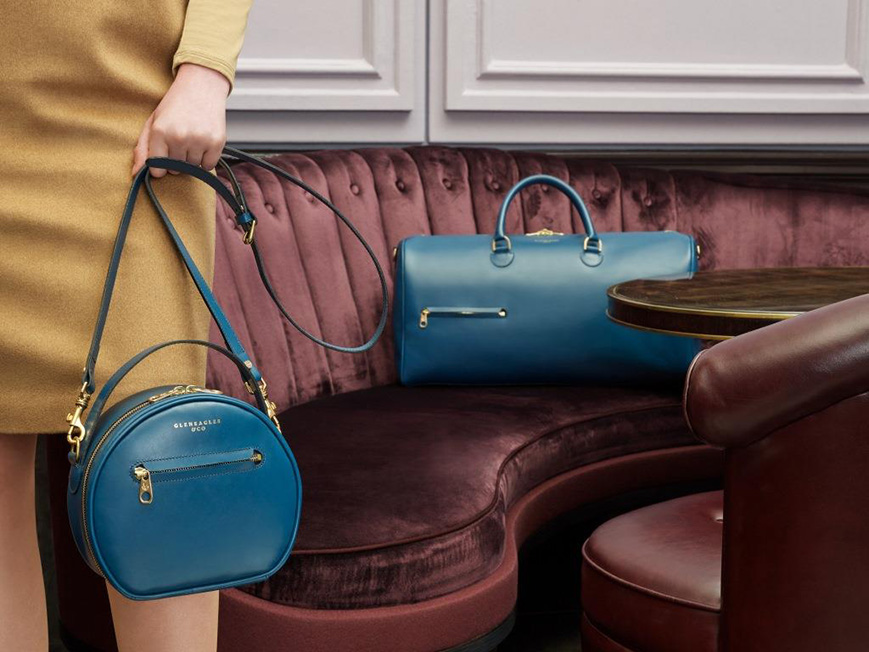 Originally built by the Caledonia Railway Company, Gleneagles first opened its doors in 1924, and is one of the country’s most iconic railway hotels. The genesis of the collection can be found in the popular 1950’s hat box, which ladies used to carry on the trains to and from the hotel. Comprising a range of cross-body, holdalls and messenger bags for men and women, along with smaller leather accessories, including purses and luggage tags, the collection carefully balances old-school elegance with a contemporary aesthetic, and items are named after railway stations on the London to Gleneagles train route.

The railway journey motif continues to permeate as the collection’s deep navy, rich brown and striking teal palette references the colours used in steam locomotives during the early 1900s, including the LMS locomotive used on the London to Gleneagles route. Complementing this, upon opening, the collection’s lining adorned with thistles offers a glimpse of the hotel’s past as it pays homage to a wallpaper pattern discovered in the hotel’s archives, reinterpreted by illustrator Louise Mulcahy.

To bring the collection to life, Gleneagles has partnered with two iconic British heritage brands that share the hotel’s passion for luxury. Tusting, a prestigious family-owned leather goods company will assemble the large bags, and iconic luxury leather goods firm, Launer, will produce the smaller items. “We’ve chosen to collaborate with two globally recognised British manufacturers who have a reputation for understated, refined luxury,” said Hanna Ter Meulen, Product Director at Ennismore. “With so many similarities between the values and histories of Gleneagles, Tusting and Launer, we’ve created a collection that is a true celebration of British craftmanship.”

The collection will be available to pre-order on Friday 12 October from the Gleneagles & Co online shop and will be available to buy from the hotel’s retail arcade from 19 October. A personalisation service is available for those wishing to have their initials engraved on items from the collection. The handcrafted leather collection is the newest strand of the hotel’s luxury retail offering, Gleneagles & Co, which also includes a fine foods range created in collaboration with local Scottish artisan producers, to celebrate the wealth of traditional recipes, cooking heritage and high-quality ingredients in Perthshire and across Scotland.